Socio-Political Situation of the Crimean Tatars
81
Since the annexation of Crimea by Russia, a systemic policy of discrimination against its indigenous population—the Crimean Tatars—has been carried out on the territory of the peninsula. This nation, which for historical reasons shows mostly anti-Russian and pro-Ukrainian attitudes, is treated by Russia as an obstacle in consolidating its power in Crimea. The international community has limited possibilities to put pressure on Russia to end this practice. However, any actions supporting the Tatars may slow down the process of russification of the peninsula and promote restoring the territorial integrity of Ukraine.
Maria Piechowska 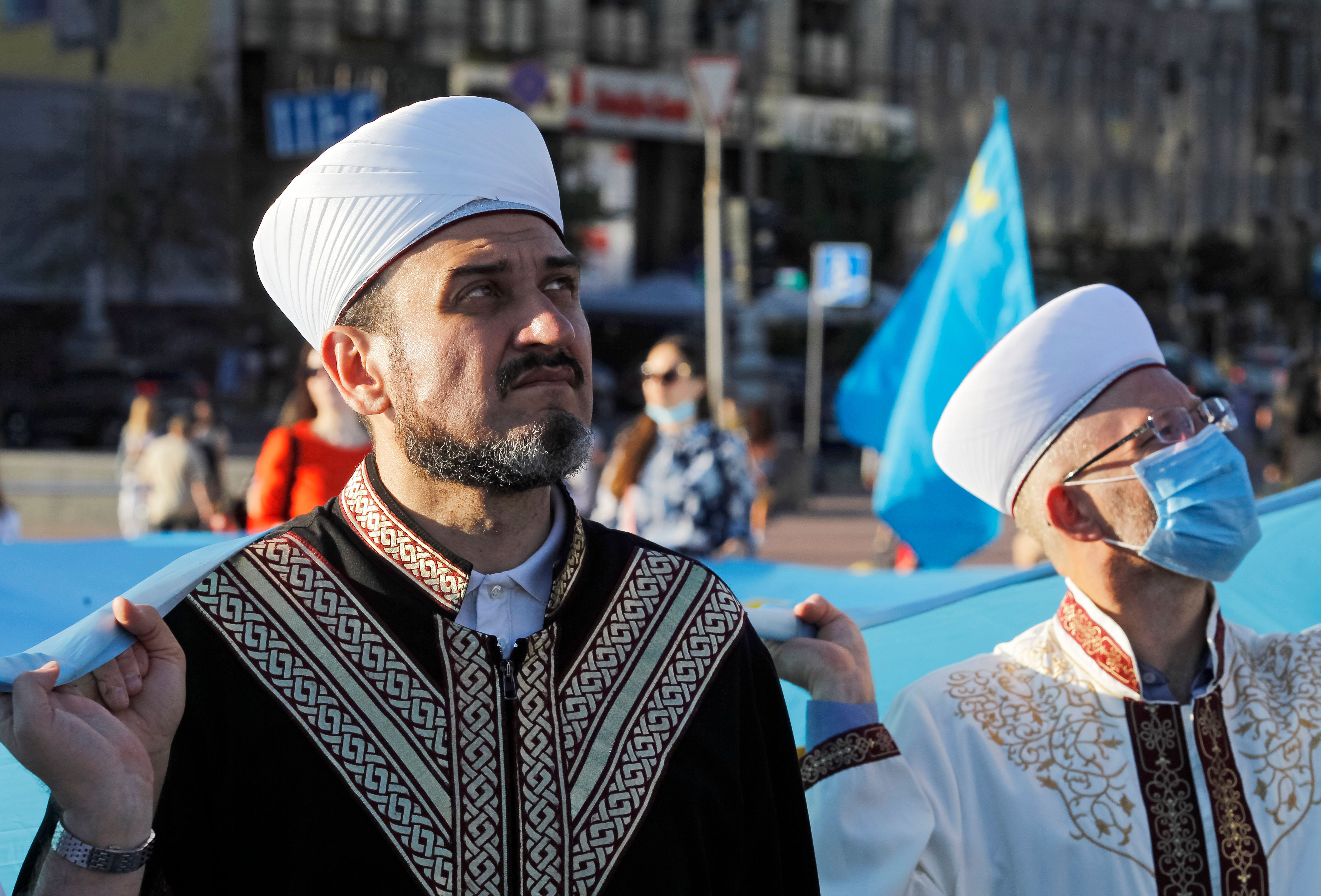 Before the peninsula’s annexation by Russia, Crimea was inhabited by about 300,000 people of Crimean Tatar nationality (about 12% of the total population). It is estimated that after March 2014, about 25-45,000 Tatars left or were forced to leave, settling mainly in the Kyiv, Kherson, and Lviv oblasts. At the same time, an intense colonisation campaign is being carried out in Crimea. According to the Mejlis, the Tatar self-government, which currently functions in a limited form outside the peninsula, about 250-500,000 settlers from Russia were brought to Crimea, including officials and military personnel with their families. There are settlement support programmes for newcomers, such as housing compensation. Land belonging to people who have not acquired Russian citizenship (largely Tatars) is confiscated from them. In 2020, Russian President Vladimir Putin signed a decree banning “foreigners” and “foreign legal entities” from owning land in most of Crimea. The militarisation of the peninsula also hampers the social situation in Crimea and is conducive to the strengthening of Russia’s position there.

The Tatars in Crimea are subjected to repression by Russia. In offices and courts they are denied the right to use the Crimean Tatar language, even though the occupation authorities officially recognise it as one of the state languages. Tatar-language media have been closed, and teaching in this language is gradually being restricted. As traditional forms of self-organisation cannot function (the Mejlis was banned in 2016), many Tatars have turned to religious organisations, which, however, are accused by the occupation authorities of terrorist activities. Political and religious arrests are taking place all the time, and the leaders of the Crimean Tatar community are not allowed into Crimea. Russian historical policy attributes to the Crimean Tatars the role of collaborators with Nazi Germany during World War II, which is aimed at increasing negative attitudes of the Russian public towards them.

The Tatar Issue in Ukraine

Ukraine does not have an active internal policy to support the Crimean Tatars. The current Ukrainian authorities only maintain a limited dialogue with the Mejlis after the organisation supported Petro Poroshenko, who lost in the presidential election in 2019. Since May 2019, the office of Commissioner of the President of Ukraine for the Affairs of the Crimean Tatar People, previously held by Mustafa Jemilev, the informal leader of this community, has remained vacant. The state has ceased to provide financial support to ATR television, the only Crimean Tatar channel currently broadcast from Kyiv. Also, the promises made by President Volodymyr Zelensky of symbolical support for the Tatar community (including establishing the most important Tatar holidays as public holidays in Ukraine) have not been fulfilled so far. The internal policy strategy towards occupied Crimea adopted in 2018 by the Verkhovna Rada (which largely concerns the support of Ukrainian citizens from the peninsula, including the Tatars), has been implemented only to a small extent. Only in March this year was the Strategy for the De-occupation of Crimea adopted by the National Security and Defence Council of Ukraine. Representatives of the Mejlis participated in its preparation. However, issues of particular importance to them, including the right of the Crimean Tatar people to self-determination within the Ukrainian state, were not included in the document.

At the same time, in reminding the world about the Russian aggression, Ukraine uses the human rights violations in Crimea and the persecution of Tatars in international forums. Tatar Emine Dzhaparova, appointed in May 2019 as Deputy Foreign Minister of Ukraine, became the spokesperson for the Tatar cause. The topic of the situation in occupied Crimea was raised at meetings organised by the UN, the OSCE, and the EU. At Ukraine’s request, the European Court of Human Rights is also dealing with the violations of human rights in Crimea by Russia. In 2020, Ukraine proposed the creation of the Crimean Platform, which aims to create conditions for the reintegration of territory currently controlled by Russia by increasing political and diplomatic pressure on the Russian authorities and counteracting human rights violations. The first meeting is due to take place in August this year, and support for the initiative was expressed, among others, by Poland.

Turkey is one of the countries that most actively supports the Crimean Tatar community in Ukraine and internationally. These activities are part of promoting the policy of panturism and are an element of building Turkish soft power. The Turkish authorities emphasise the cultural, linguistic, and historical closeness to the Tatars, a Turkic nation. In Turkey itself, there is a large, though strongly assimilated, Crimean Tatar diaspora, estimated at up to 6 million people, the descendants of 18th and 19th century emigrants. The Turkish authorities maintain close contact with the Mejlis and have engaged in negotiations with Russia on the release of political prisoners from Crimea. Turkey was one of the first countries to support the idea of the Crimean Platform. It also remains the main foreign funder of humanitarian aid targeted at Crimean Tatars, including financing the construction of housing estates for families who escaped from the occupied peninsula to the Kherson Oblast.

Support from other countries or international organisations focuses mainly on raising the issue of respect for human rights in Crimea. Resolutions in defence of the indigenous people of the peninsula were passed, among others, by the European Parliament and the UN General Assembly. Many countries, including Poland, also declared their support for the Tatars. Indirect political support of the Tatars is provided by the sanctions imposed on Russia for the occupation of Crimea. There are also aid programmes (e.g., by Poland) aimed at Tatars who have fled Crimea to areas controlled by Ukraine.

In the short to medium term, Russia’s policy towards the Crimean Tatars will not change. Due to the Tatars’ pro-Ukrainian orientation, Russia will seek demographic change in Crimea and further restrictions on their human rights. The persistence of a strong Tatar community on the peninsula is essential for maintaining the identity of the group and for having its own homeland. This is an important part of the support for Ukrainian territorial integrity, as it may slow down the russification of Crimea. Apart from Ukraine, Turkey—both for historical and strategic reasons—will continue to be interested in supporting the Tatars. In the future, it may use the issue of Crimea and the Tatars as an instrument of political pressure on Russia (analogous to the policy pursued in Georgia or Azerbaijan).

The existence of a well-developed centre dedicated to the Crimean Tatar diaspora would have a positive effect on the situation of the Tatars. This would allow them to maintain their national identity and prevent further dispersion across the territory of Ukraine. In the long term, it could also prepare the Tatars to return to the peninsula when it is possible. The centre could be located in Kherson Oblast where many refugees from Crimea have already settled and where many Tatar institutions are active. The EU and the U.S. could be partners in its creation.

Poland may use its membership of the UN Human Rights Council to continue drawing attention to the issue of the Crimean Tatars. Also, the upcoming chairmanship of the OSCE (2022) and the current participation in the work of the Troika (consisting of the current, previous, and succeeding OSCE chairmanships) is an opportunity to raise this topic in the international arena. Regardless of the activities within these organisations, it is worth Poland considering creating a special scholarship and internship fund for Crimean Tatar youth in order to better prepare them to work for their community.