Possible Scenarios of Russian-Belarusian Military Integration
258
Belarus and Russia closely cooperate militarily and further actions by the Russian authorities aimed at deepening integration in this area should be expected. Russia may even seek to create joint armed forces with Belarus, which would be an additional way to secure the west of Russia. For Belarus, this would mean a loss of sovereignty in defence policy. Such a scenario should be taken into account in military planning by NATO members, especially those on the Alliance’s Eastern Flank.
Anna Maria Dyner 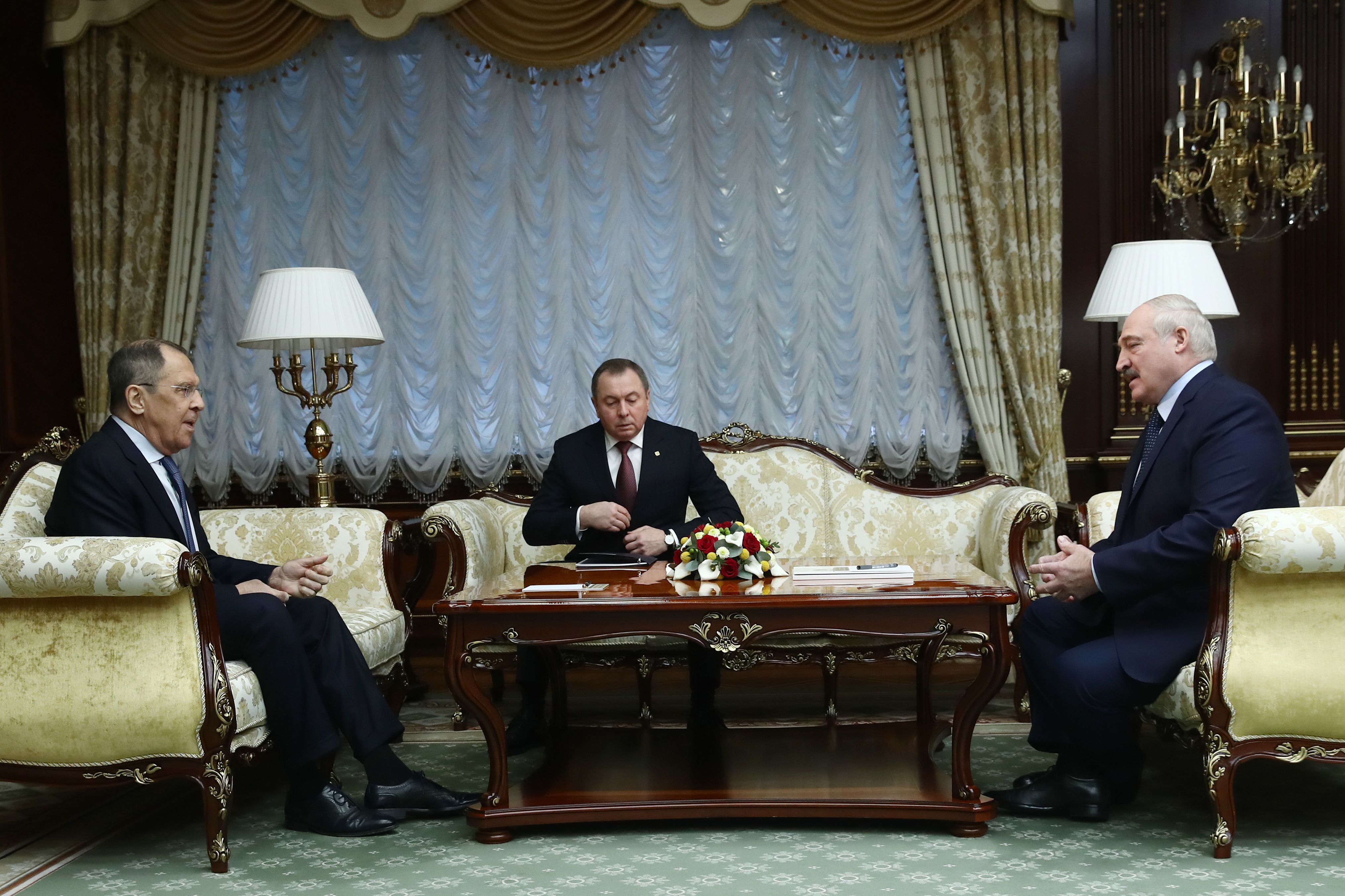 Immediately after the presidential election on 9 August, widely considered rigged and which triggered significant protests and a political crisis, Alexander Lukashenka asked the Russian authorities for help with the potential of intervention by NATO countries as a threat to Belarus. This request weakened the political position of the Belarusian government towards Russia and gave the latter the opportunity to exert additional pressure to deepen the integration of both countries, especially in the military sphere, under the pretext of an external threat.

Since September, both countries have participated in a series of joint military drills in Belarus, including Slavic Brotherhood and the Collective Security Treaty Organisation (CSTO) exercise Inviolable Brotherhood. The scenarios assuming conflicts with neighbouring NATO countries were to prove that Belarus, Russia, and the CSTO treat the threat from the Eastern Flank seriously.

Since August, many meetings have been held at the level of defence ministries and general staffs of Belarus and Russia, including a joint meeting of colleges of defence ministries. During these meetings, issues related to the further deepening of military cooperation were discussed and joint actions, such as next year’s Zapad drills, were planned. The authorities of both countries also declared the need to increase military integration, the aim of which is to defend the Union State of Belarus and Russia.

For Russia, deepening its military integration with Belarus is beneficial for two reasons. In the political dimension, it limits Belarus’ ability to conduct foreign and security policy independently, including cooperation with the European Union and NATO. In the military dimension, it gives Russia additional security in the western strategic direction, which is crucial for the functioning of the state, including Moscow and the second most-populous city, St. Petersburg. For Belarus, although integration may be justified, for example, by the need to modernise its Armed Forces, this will mean a significant loss of sovereignty.

The first element in deepening Russia’s military integration with Belarus may be the signing by the Belarusian authorities of the military doctrine of the Union State. A new version was adopted by Russia in 2018, but its entry into force has been blocked by the Belarusian authorities (the current one has been in force since 2001). The content of the 2018 document has not been made public, but Russia, taking advantage of the crisis in Belarus, may force Lukashenka to adopt it or even revise it in Russia’s favour. Most desirable from the Russian point of view is the provision that, if it is necessary to defend the Union State, a Regional Forces Group will be led by the commander of the Russian Western Military District.

Russia may also take steps to provide logistical security for its units, which would operate from Belarus in a crisis or conflict. It cannot be excluded that Russia will want to create a materiel network of logistic bases with heavier equipment, weapons, food rations, fuel supplies. This will allow Russia to quickly move forces across the territory of Belarus and achieve full combat readiness in a short period. For Russia, it also is especially important that the agreement guarantee the free use of Belarusian military infrastructure, such as airports, when it considers a situation a threat to Russia’s security. Russia may also propose a rotating military presence in Belarus, with units stationed there equipped with new types of weapons, especially Iskander systems (NATO: SS-26 Stone) and S-400 air-defence systems (SA-21 Growler). It can be expected also that Russia will renew its efforts to create a classic military base in Belarus with several thousand soldiers equipped with, among others, radio-electronic warfare systems (currently Russia has two military facilities in Belarus, a radiolocation station and a centre to communicate with nuclear submarines).

It should also be expected that Russia and Belarus will intensify their joint training activities. This will allow for even greater interoperability—already high—of units from these two countries. Moreover, it cannot be excluded that in the next few years Russia will strive to create a joint Armed Forces with Belarus, which may be formed from the Regional Forces Group. For this purpose, the Russian authorities would take advantage of Belarus’ progressive dependence on Russia. Hence, the changes to the constitution planned by the Belarusian government as well as the probable appointment of the next president of the country, will be crucial for the future of Belarusian security policy. If the next president becomes an unequivocally pro-Russia politician, Russia will have an open path to the full military subjugation of Belarus. In turn, military integration may be stopped by clear opposition from Belarusians.

Russia will use Lukashenka’s declarations about the alleged threat posed by neighbouring NATO countries and Ukraine to increase its military presence in Belarus. Deepening military integration will also be the price that the Belarusian authorities will have to pay for Russian political and economic support in the face of the mass protests and Belarus’ isolation on the international arena.

The nature of the future cooperation undertaken by both countries and the scenarios of next year’s drills, especially the Zapad 2021 manoeuvres, will be an important indicator of changes that have taken place in the operational planning of the joint forces of Belarus and Russia. A significant concession to Russia would be the adoption by Belarus of the new military doctrine of the Union State, the provisions of which, in extreme cases, may be used to create joint military units and, in the long term, integrate the Armed Forces of the two countries.

NATO should be concerned not only about the potential for a joint Russia-Belarus Armed Forces but also the deployment of logistic bases in Belarus, which would increase the capabilities of Russian troops to conduct rapid operations with heavy equipment in Alliance border regions. The security situation in Central and Eastern Europe will also be stressed by the deployment of Russian rotating forces in Belarus or by the creation of a classic Russian military base there.

A closer military alliance between Belarus and Russia therefore poses a threat not only to neighbouring NATO countries, such as Poland, but also to Ukraine. Thus, NATO should clearly communicate to Russia that such activity will meet with a response from the Alliance, for example in the form of further strengthening of the Eastern Flank and even the deployment of additional defensive weapons to member states in this area.

At the same time, regardless of actions aimed at increasing Russian-Belarusian military integration, it is worth maintaining channels of communication with Belarus in the security sphere, such as through the OSCE. The mechanisms of this organisation will be necessary to maintain arms-control regimes and may allow avoidance of military border incidents, such as those involving Belarus that took place this year. For Poland, which will take over as chair of the OSCE in 2022, and from 1 January 2021 will participate in the work of the Troika, it is necessary to emphasise that greater activity by Belarus within the OSCE would also serve the country’s security. Poland may indicate that, in order to maintain a minimum level of trust in military relations with Belarus, it should properly inform about the Zapad exercises planned for 2021. Poland also should continue to actively use a bilateral set of security-building measures complementary to the Vienna Document on confidence and security-building measures of 2004, which, among others, lowers the limits at which invitations to observe drills is mandatory.