Strona główna The V4 in NATO: towards the next strategy and beyond

The V4 in NATO: towards the next strategy and beyond 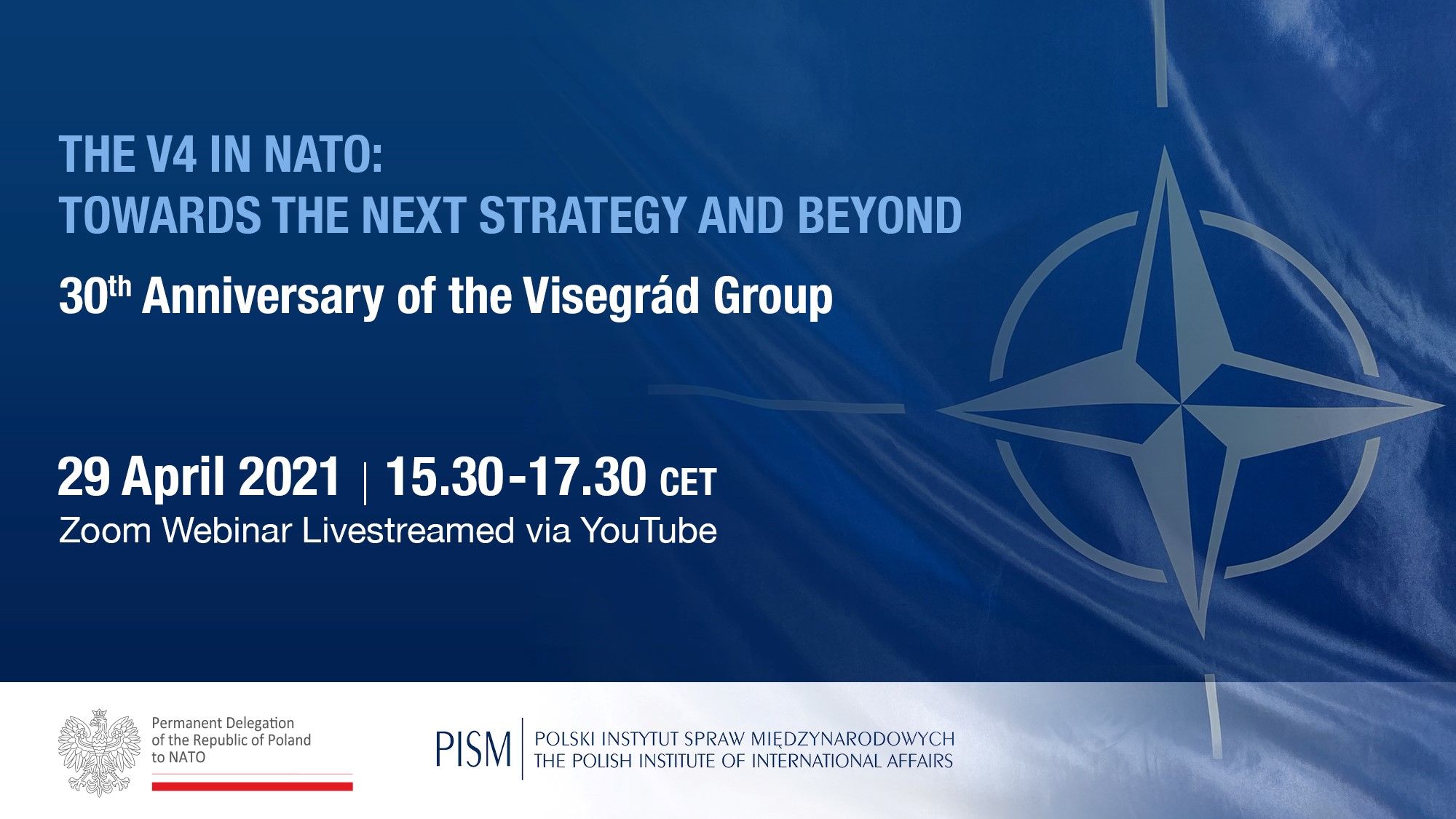 The Permanent Delegation of Poland to NATO

invite you to the

The V4 in NATO: towards the next strategy and beyond

On Thursday, April 29th, PISM Brussels and the Permanent Delegation of Poland to NATO had a pleasure to organize an online conference, which was meant to commemorate the 30th anniversary of the Visegrad Group. The webinar was titled: “The V4 in NATO: towards the next strategy and beyond” and grouped high level panellists as well as renowned experts. We have been honoured to have been joined by the Permanent Representatives of the Visegrad Group countries to the NATO, who have been so kind as to have agreed to deliver their presentations on their countries’ perspectives on the future of the NATO, the V4’s role in the Alliance, the most pressing threats and issues that the NATO will need to prioritize in the years to come as well as on the most relevant strategic direction that the organisation should follow in the future.

After the opening remarks delivered by the Director of PISM Brussels, Lukasz Jurczyszyn, Polish Deputy Foreign Minister Mr Szynkowski vel Sek took over the floor to present one of the two keynote speeches. Minister Szynkowski stressed that the NATO needs to work continuously, nor more than ever, to boost its resilience to hybrid threats, which will, in turn, enhance the overall resilience of the Alliance’s citizens. Additionally, Minister Szynkowski noted that collaboration, the ‘open door’ policy and the interoperability of members’ forces are the keys that, if fostered and developed, will assure the overall success of the NATO in achieving its objectives of achieving security. Mr Wess Mitchell, the co-chair of the NATO Reflection Group was kind enough to deliver the second keynote speech, in which he emphasized that the Alliance needs to urgently adapt its political tools and processed to match the rise of China and the political and security persistence of Russia. As according to Mitchell, NATO needs to take China seriously and it should coordinate with Asia Pacific partners to develop a relevant China strategy.’

The first session was composed of the Ambassadors of the Visegrad countries to the NATO. In his speech, the Czech Ambassador Jakub Landovsky said that there is a great deal of possibility to boost military cooperation in the Alliance, as long as the members are willing to reinforce their mutual capabilities and support each other. The Permanent Representative of Hungary to the NATO, Mr Zoltan Nagy noted that NATO needs a new strategic concept of NATO’s modus operandi ahead of the summit. Ambassador Nagy stressed that we need a balanced approach between the political and the military, the regional and the global and conventional and nuclear dimensions of the Alliance. The Czech Ambassador added that only divisions will make NATO weaker. Polish Ambassador Tomasz Szatkowski focused on the fact that we need an updated deterrence and defence resilience strategy in the Alliance, he also noted that NATO will be stronger if its member states strive for a more cohesive structure of its forces. Slovakian Ambassador Peter Bator talked about the fact that we need to make sure to reintegrate NATO’s values: democracy, rule of law, collective defence and peace into all of the NATO’s strategi priorities.

The second session grouped experts and academics in the field of defence and security. Justyna Gotkowska, Project Coordinator of Security and Defence in Northern Europe Programme, Centre for Eastern Studies, Poland (OSW), focused on the importance of reinvigorating the regional cooperation to respond in a more adequate manner to evolving external and internal challenges that NATO deals with. Martin Svárovský, Head of Security Strategies Program, European Values Center for Security Policy in Czech Republic noted that there exists no common threat assessment mechanism in NATO and the level of protectionism in defence industry is still very high. These factors slow down effective cooperation between NATO member states. Matej Kandrik, Director, STRATPOL in Slovakia, added that we need to absolutely prioritize joining forces within the framework of the NATO. Lastly, Mr Alex Etl, the Research Fellow from Institute for Strategic and Defence Studies in Hungary emphasized that an updated strategic direction, a more cohesive cooperation in terms of joint forces operations will not only enhance the NATO member states’ security but also it will update the Alliance’s image and branding which is in the members’ shared interest.

The conference enjoyed a particularly high turnout with audience actively engaging in the conversation by asking relevant questions and sending informed comments relating to the panellists’ speeches.

We are confident that our future events will be as engaging as this one. We are looking forward to having our audience join us for our upcoming conferences.

In case you have missed the conference, the recording is available online, via following link:

Session 1: NATO’s next strategy – the views from Visegrád

Session 2: The record and prospects of V4 defence cooperation

Closing remarks by the Chair