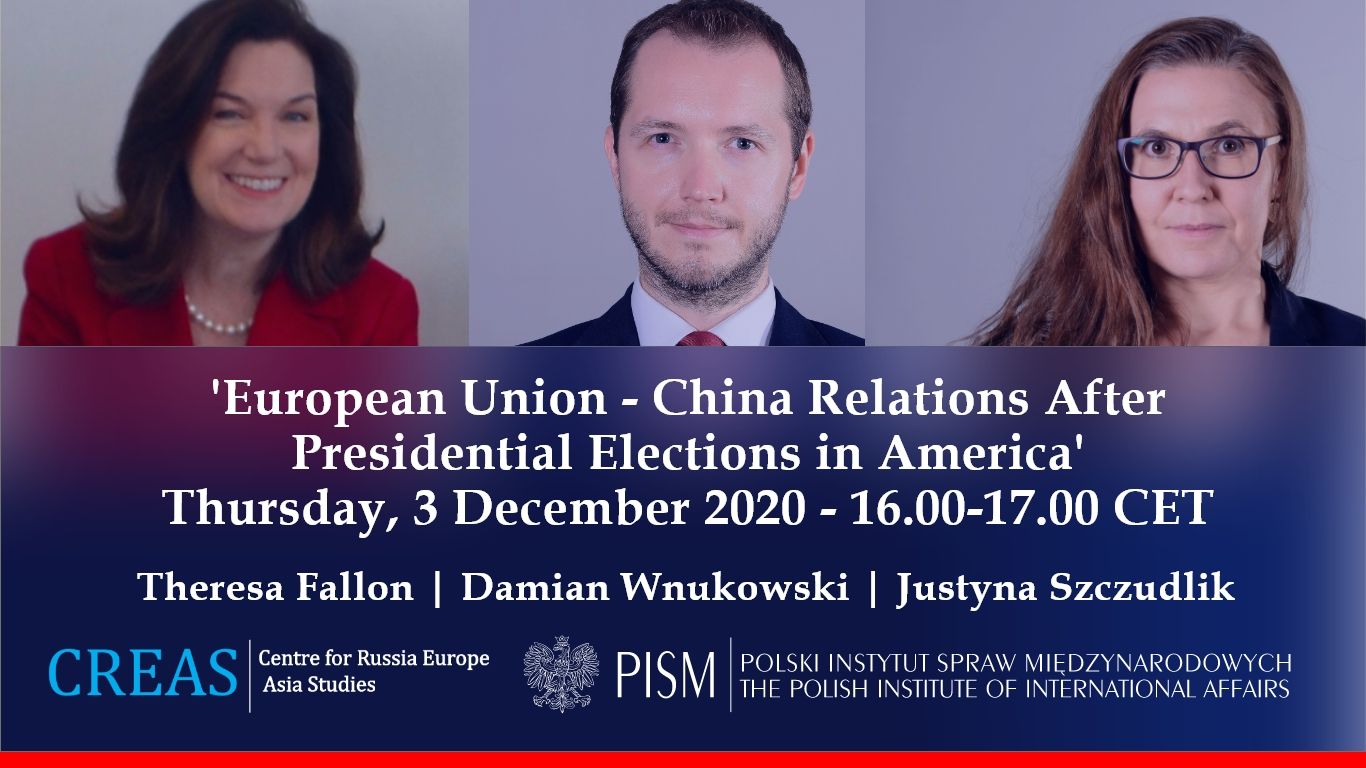 The online, public debate, which has been hosted by PISM Brussels Office in collaboration with the Centre for Russia, Europe, Asia Studies (CREAS) revolved around the EU and China relations in light of the recent presidential elections in the United States and their results. The webinar took place less than a month after the official election results have been confirmed once and for all and all votes have been finally counted. Such proximity to these events has contributed to the relevance and importance of the talk, which, in itself has benefited from a high turnout and a diversity of audience.

The experts who agreed to take part in the debate were: Theresa Fallon, the founder and director of CREAS, Justyna Szczudlik, the Deputy Head of Research, Head of Asia-Pacific Programme and China analyst, PISM Poland and Damian Wnukowski, the PISM Poland Analyst in the Asia-Pacific Programme, who moderated the conversation. Dr Lukasz Jurczyszyn, the Director of PISM Brussels delivered opening remarks and a concluding note.

Dr. Lukasz Jurczyszyn opened the event with introductory remarks about PISM’s aim to be a public platform for a regional perspective not often present in Brussels debates.

He, then, made short introductions of the two panellists: Miss Theresa Fallon and Miss Justyna Szczudlik, upon which time their presentations followed.

Theresa Fallon provided the listeners with information regarding historical and geopolitical context of the China and European Union relations over the past few decades. She has also summarized the trends and the change of dynamics that we have been witnessing between the two over the past few years.

Additionally, Miss Fallon discussed the fact that the relationship between the EU and China has already started becoming tense already before the outbreak of COVID-19 pandemic. Fallon has referred to the initial period of he EU-China cooperation, as a ‘honeymoon period’, which lasted on and off, for a few decades, gradually to have evolved into a ‘Naïve No More’ approach of the two actors to one another. These strains in the Brussels/Beijing relations were already very visible well before 2019. In fact, the public opinion in the European Union Member States has been more and more weary of the Chinese human rights abuses, especially in the Xinjiang province, as well as the situation in Hong Kong and the increasing Chinese presence in the European economic initiatives due to the Belt and Road Initiative, which has brought Beijing ever close to the European borders.

Miss Justyna Szczudlik from PISM Poland has provided an invaluable analysis of the present challenges between the EU and China. She has also presented the Chinese view of the future relation between the two. According to Szczudlik, China’s main goals regarding its cooperation with the European Union are twofold: first, Beijing is keen on maintaining the status quo in the matter – it wants to maintain positive dialogue in order to keep European markets open to Chinese investment and economic projects. At the same time, China does not want the European Union leaders to become too engaged and outspoken in the topic of human rights and the respects as well as adherence to the values of international human rights law. As the EU has been increasingly outspoken regarding the discrimination of the ethnic Uighurs in Xinjiang, this has been a cause of growing tension between the two actors.

Additionally, the two experts explained that both the EU and China have had a difficult time redefining reciprocity notion, especially in light of the growing Chinese economic proximity in light of the Chinese Belt and Road Initiative. Beijing’s increased willingness to invest in the European markets has also resulted in Chinese accusations of the EU’s protectionism, which does not allow Beijing to fully enjoy economic benefits stemming from unlimited investments.

In her concluding remarks, Theresa Fallon discussed the threefold view that China has of the EU, considering it: a partner, economic competitor but also systemic rival, which, in itself, creates a relative dissonance and multidimensional bumps on the road ahead. Justyna Szczudlik added that the EU will continue to make an effort to create a relative balance of strategic relationship by trying to connect and support nations in the Indo-Pacific region, without including China, in order to create less dependency on Beijing when operating in Asia.

In conclusion, all panellists agreed that the road ahead will not be without difficulties and competition. It will be up to both China and the European Union to decide whether or not they will prioritise dialogue and connectivity rather than competition and a standoff-like approach to protect their internal interests no matter what the cost.

The turn-out at the debate was particularly high which encouraged both co-organisers to work together on another similar event.