Strona główna EEAS at 10: increasing the buy-in from the member states

EEAS at 10: increasing the buy-in from the member states 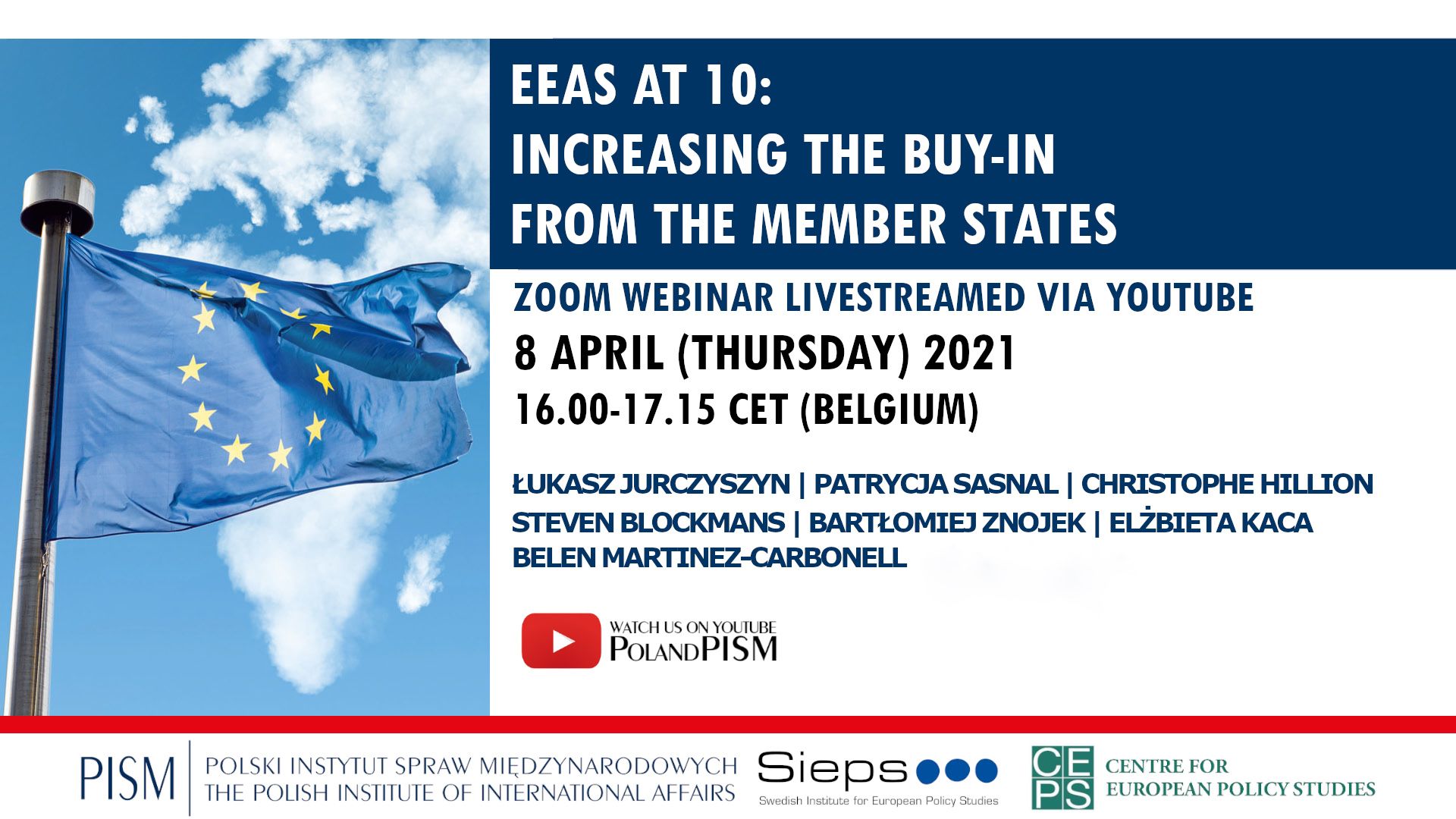 EEAS at 10: increasing the buy-in from the member states

The online debate, which was hosted by PISM Brussels Office in collaboration with the Centre for European Policy Studies (CEPS) and The Swedish Institute for European Policy Studies (SIEPS) focused on the analysis of the European External Action Service (EEAS)’ first decade of existence. The webinar was based upon two recent reports studying the organisation – the first one, titled: “From self-doubt to self-assurance. The European External Action Service as the indispensable support for a geopolitical EU” by CEPS and SIEPS, and the second one, under the title: “Specifics and trends in the appointment of European External Action Service Administrative Staff (2011–2019)” put forward by the Polish Institute of International Affairs (PISM). The debate served as a forum for an exchange of ideas by the reports’ authors: Christophe Hillion, Senior Research Fellow at the Swedish Institute of European Policy Studies and Steven Blockmans, Director of Research at the Centre for European Policy Studies, as well as Bartłomiej Znojek and Elżbieta Kaca – Senior Research Fellows, the Polish Institute of International Affairs. After the opening words by PISM Brussels Office Director – Lukasz Jurczyszyn and the introductory remarks by Patrycja Sasnal – the Director of Research at PISM, the authors of the two reports summarised their findings. In his presentation, Mr Blockmans highlighted that, in the recent years, the information sharing processes within the EEAS have been increasing gradually due to the need of interconnectedness between the EU institutions. Mr Christophe Hillion added that recommendations provided regularly to the EEAS have already led to a degree of implementation, which can be seen through an increased inter-service mobility as well as a larger number of staff trainings, which bodes well for the future efficacity of EEAS.

Following, Bartłomiej Znojek and Elżbieta Kaca – the authors of the PISM report on EEAS summarised their analysis: according to Mr Znojek, women still remain visibly underrepresented in EEAS, albeit the overall gender balance is gradually improving. Also, Mr Znojek emphasized that the EU should do more on the issue of transparency as well as on geographical balance in terms of EEAS staff. Following up on that point, Elzbieta Kaca added that, indeed, EEAS is still predominantly composed of ‘old’ EU member states, even though the situation is changing slowly.

Mrs Belen Martinez-Cordonell, the Director of Human Resources at EEAS commented on both reports and provided her own feedback on the information included in the documents. According to Mrs Martinez-Cordonell, the COVID19 pandemic has mobilised EEAS to stand in the frontline of the EU affairs and to be more proactive in terms of communications between the EU institutions and the member states. Also, in the recent years, the EEAS management has taken it as a priority to make additional efforts to address the geographical imbalance in staff composition at the institution – indeed, the improvements are already visible: as noted by Mrs Martinez-Carbonell, at present 25% of EEAS staff comes from the EU13 and the number is regularly increasing.  In his concluding remarks, Mr Blockmans noted that diversity of staff from various geographical and political backgrounds fosters information sharing and should always be promoted, especially in the European institutions.

The registered participants were able to actively join the conversation and ask their questions as well as provide their own feedback on the first 10 year of EEAS’ existence, lessons learnt and recommendations. The turnout at the debate was high and the audience was keen on asking questions to the panellists present.

In case you have missed the conference, the recording is available online, via following link: https://www.youtube.com/watch?v=G_69Ow2R-IM&ab_channel=PolandPISM

Presentation of the reports (20 min)